Any movie that reminds us of the ongoing civil rights scandal at the US’s extrajudicial detention camp at Guantánamo Bay should be a good thing: it’s still open for business right now, with 40 prisoners inside. The same goes for any reminder of the 9/11 terrorist outrage and the backlash of furious revenge it was designed to provoke, implanting a virus of rage and fear that threatens to live on in the American bloodstream like malaria.

But I was disappointed by this well-meaning movie, based on the true story of Mohamedou Ould Salahi from Mauritania in north-west Africa. A former muhajideen anti-communist fighter in Afghanistan in the 1990s, who was picked up and handed over to the US authorities after 9/11 (with the Mauritanian government’s permission) and kept at Guantánamo Bay without charge or trial for a staggering 14 years, from 2002 to 2016; he was released when the state finally accepted his confessions were valueless, having been obtained through torture.

The film is adapted by screenwriters MB Traven, Rory Haines and Sohrab Noshirvani from Salahi’s book, Guantánamo Diary, published in 2015 while he was still inside: the scribbled pages regularly handed to his lawyer Nancy Hollander. Franco-Algerian star Tahar Rahim plays Salahi; Jodie Foster plays Hollander and Shailene Woodley is her associate, Teri Duncan. Benedict Cumberbatch plays the crewcut military prosecutor Lt Col Stuart Couch, who was pretty gung-ho about getting the death penalty for his man until he realised that it meant relying on torture and disregarding the constitution and the rule of law.

So far, so admirable. But with this movie, we are plunged right back into the exasperating 9/11 fence-sitting handwringer genre that was fashionable in the 00s: conscience-stricken films that invited us to sympathise with their liberal agony, such as Robert Redford’s Lions for Lambs (2007), Gavin Hood’s Rendition (2007) and Stephen Gaghan’s Syriana (2005).

The Mauritanian is a movie that appears to be comprised entirely of good guys: Salahi himself is a good guy, of course, and so naturally are Hollander and Duncan, doggedly ploughing through the boxes of legal documents that the authorities allow them to see, and persistently asking for more. But the chief prosecutor Couch is a good guy as well, troubled with his finally overwhelming qualms of conscience as a true patriot. (Hollander and Couch are shown having a reasonably cordial beer together at the Guantánamo visitors’ cafe.) Finally, Salahi gets his day in court in which, with stirring music on the soundtrack, he praises American TV shows such as Ally McBeal and American justice itself.

So with all these potent good guys effectively rooting for the prisoner, why did he stay banged up for so long? There are no major players on the bad guy team here: authoritarian meanies are permitted on screen on condition that they are dramatically dominated by a liberal convert: Cumberbatch. There is nothing and no one in this film with the dramatic status of, say, Jack Nicholson’s ferociously unrepentant Colonel Nathan Jessup in A Few Good Men, scripted by Aaron Sorkin, and there is no “you can’t handle the truth” moment. There is just official silence from the authorities and the drama itself; a sombre announcement flashes up on screen that Salahi stayed in Guantánamo for eight years after the prosecution collapsed in 2010 – by order of the Obama government. As for Salahi himself, he doesn’t seem bitter about the US nor Mauritanian authorities by the end of the picture; he doesn’t wish to take action against them, yet neither does he explicitly forgive them.

It’s opaque and frustrating. Rahim gives a perfectly decent performance and everyone else does an honest job. Salahi himself is throroughly entitled to his own happy ending, cheerfully listening to Bob Dylan over the closing credits. But this movie is content with congratulating itself for being on the right side of history, with little attention paid to questions unanswered and history unresolved.

Any admirer of French cinema over the past 40 years will have developed a soft spot for the hangdog looks and gruff, rumpled charm of the actor Jean-Pierre Bacri, who has died aged 69 of cancer. In the tradition of Walter Matthau, he brought sympathetic comic shading to even the most irredeemable worrywart or miseryguts. His speciality was a saturnine impatience with life that was nonetheless susceptible to glimmers of optimism; he could mope and hope with equal conviction. The French president, Emmanuel Macron, praised his “laconic and sensitive humanity”, calling him “the tenderest of our grouches”.

Those qualities were present also in Bacri’s award-winning screenplays, written mostly with his longtime partner Agnès Jaoui; their collaboration outlived the end of their relationship in 2012. They co-wrote and starred in a series of urbane and insightful comedies of manners, which Jaoui also directed, and which earned her comparisons to Woody Allen. In Under the Rainbow (2013), it was Bacri who took the Allen-esque role of a disconsolate driving instructor convinced his number is up after a fortune teller predicts the date of his death. “You’re shut tight like a vault,” his girlfriend tells him, prefiguring a pleasure common to many of Bacri’s performances: that slight eventual unclenching as his characters start to entertain the remote possibility of joy.

The couple’s biggest success was The Taste of Others (Le Goût des Autres) (2000), Jaoui’s directing debut, in which Bacri played a philistine factory owner besotted by the lead actor (Anne Alvaro) in a production of Jean Racine’s Bérénice. It was an international hit, and a surprise Oscar contender for best foreign language film.

They won the best screenplay prize at Cannes for Look at Me (2004), starring Bacri as an arrogant publisher who behaves cruelly toward his overweight daughter. In their follow-up, Let’s Talk About the Rain (2008), he was a struggling film-maker. Their final project together, Place Publique (2018), cast him as a washed-up TV presenter.

“I would have made more egocentric movies without him,” Jaoui said in 2008. “He is self-taught, and when he knows something, he knows it forever.” She called him “my favourite actor and writer” and “the man that understands me the best and the quickest”. The affection was reciprocated. “It’s a vacation when I work on a film with Agnès,” Bacri said. “We talk, smoke joints … We like each other.”

The critic David Denby said the couple had “mastered the art of complex narrative. They have a story to tell, but they go so far into manners, quirks, and undertones that we feel, at the end of their films, that we have understood not just a dramatised anecdote but an entire way of life.” Denby called Bacri “a master of the many shades of half-interest and sullen boredom. His expression asks, ‘What’s the point?’”

He was born in Castiglione (now Bou Ismaïl) in Algeria, the son of a postman and a housewife, and raised in Cannes; he traced his love of film to his father’s weekend job at one of the town’s cinemas. He was educated at the Lycée Carnot in Cannes, then moved to Paris in 1976 to become an advertising copywriter. He studied drama from 1977 at Le Cours Simon and won a prize two years later for his play The Sweet Face of Love.

French film and television work followed, with early parts including a pimp in Le Grand Pardon (1982), a would-be actor in postwar Lyon in Diane Kurys’ Entre Nous (1983), and a cop in Luc Besson’s stylish thriller Subway (1985), for which Bacri earned his first César nomination. He met Jaoui in 1986 when they appeared in a production of Harold Pinter’s The Birthday Party. They began writing together soon after.

The couple’s first script, Cuisines et Dépendances (1993), was adapted from their own Molière award-winning play about a fraught reunion between a group of friends. For the innovative director Alain Resnais, they adapted Intimate Exchanges, Alan Ayckbourn’s extraordinarily complex set of plays, into the two-part film Smoking/No Smoking (1993), in which a variety of possible outcomes (16 on stage, 12 in the screen version) result from one woman choosing whether or not to light a cigarette. This was a script arrived at “more by pruning than elaboration”, as the critic Adam Mars-Jones put it, though it won Bacri and Jaoui the César award for best screenplay.

They took that prize a further three times: for Un Air de Famille (1996), co-written with its director, Cédric Klapisch; On Connaît la Chanson (1997), also known as Same Old Song, their second picture with Resnais, which was dedicated to Dennis Potter and employed that writer’s technique of having actors lip sync to well-known musical numbers (Bacri also won a César for his performance in that film); and for The Taste of Others.

His finest work outside those collaborations with Jaoui included Looking for Hortense (2012), directed by the former Cahiers du Cinéma critic Pascal Bonitzer. Bacri was poignant as a downtrodden professor called upon to save a young immigrant from deportation just as his own wife, played by Kristin Scott Thomas, is deserting him. The film features a discussion of different categories of sorrowful smile – the “I owe you money but I’m broke” smile, the “I’m hurting but it’s no big deal” smile – which plays like a roll call of the actor’s own repertoire of facial expressions.

He could find the truth in any scenario, from the unusual demands of the fantasy comedy Didier (1997), in which he played a failing soccer manager dog-sitting a labrador that turns into a man, to C’est la Vie! (2017), a French box-office hit in which he was a wedding caterer reduced to a spluttering incredulous wreck by a string of professional disasters.

By 30, Bacri had already arrived prematurely on screen at a kind of defeated middle age, where he remained for the rest of his life. Audiences would not have wanted him any other way.

Lili Reinhart Shared Some BTS Photos Of The "Riverdale" Pilot 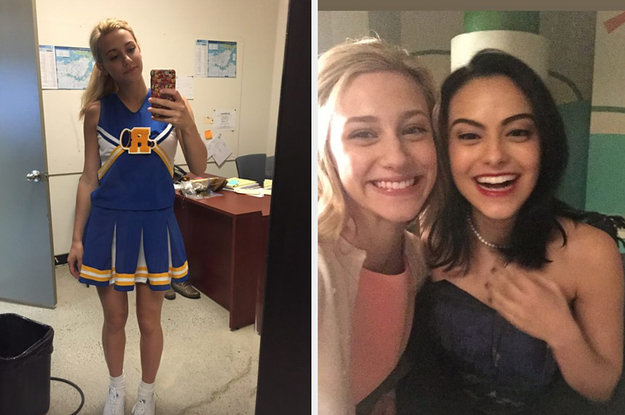 The movie covers the moments when Princess Di realized her marriage to Charles was over, during Christmas weekend in the early ’90s.

Well, we’ve just been given our first look at Kristen as Diana, and, my God, I am flabbergasted.

For context, here’s the actual Diana on Christmas day:

Director Pablo Larraín previously told Deadline, “Kristen is one of the great actors around today. To do this well, you need something very important in film, which is mystery. Kristen can be many things, and she can be very mysterious and very fragile and ultimately very strong as well, which is what we need. The combination of those elements made me think of her.”

Are you looking forward to Spencer? LMK in the comments!

Apple is one of our biggest competitors