Hours before Kolkata Knight Riders’ match against Mumbai Indians on Friday, Dinesh Karthik stepped down as captain, with Eoin Morgan replacing him. The announcement came four days after Knight Riders’ crushing loss to Royal Challengers Bangalore. It was their third loss in seven games.

As far as mid-season captaincy switches go, it’s not a rare development in the Indian Premier League. There have been enough instances when teams were forced to change (usually described as player’s decision) their captains mid-season after enduring a poor run of results — Rohit Sharma taking over from Ricky Ponting in 2013 being the most successful of such decisions.

But, has it really been a ‘poor’ first half of the season for KKR? Not really. KKR sit pretty at fourth in the points table having won four games, a better result than 50 per cent of the teams, including three-time champions Chennai Super Kings (CSK). Only two teams, Mumbai Indians and Delhi Capitals, have fared significantly better than KKR.

As a captain, Karthik is neither woeful, nor exceptional; he is a fine leader with enough experience to make tactical decisions and a lot of coolness to handle the heat of a tough game. Some of his decisions, mostly batting positions of some of the players, have been questioned in the course of the tournament. But is it not true for all the captains, including Virat Kohli?

We must remember, in Karthik’s captaincy, KKR won two matches that they should have lost — vs CSK and Kings XI Punjab. In the latter, he also scored a match-saving 58.

His or his team’s decision to hand over captaincy to Morgan is less about Karthik leadership abilities and more about his batting form — he has only 112 runs from 8 innings. Relinquishing captaincy also didn’t bring any relief as Karthik could only manage 4 runs in his first post-stepping down innings. A player’s position becomes untenable when he is not contributing with the bat or the ball, even if you are the captain (unless you are MS Dhoni). Luckily for Karthik, there is no young, talented wicketkeeper on the bench to challenge his position in the playing XI.

Morgan has better statistics with the bat — 214 runs from 8 innings that make him the second best-batsman at KKR. Also, his success as England limited-overs captain makes him a tempting choice for the captaincy. One of the reasons why KKR bought Morgan at the 2020 auction for Rs 5.25 crore, along with providing strength to their middle-order, was to be able to use his extensive experience as leader.

Considering Morgan’s achievements and influence as leader, perhaps KKR should have handed over the captaincy at the beginning of the season. Doing so in the middle of the season leaves an unpleasant taste. Karthik may not have the cult following of Dhoni but he is a likeable figure with a permanent smile pasted on his face. And who doesn’t like to see a smiling face!

Changing captain in the middle of the tournament rarely changes the team’s fortunes. If anything, it’s about planning for the next season. Delhi Capitals did that in 2018 when they replaced Gautam Gambhir with Shreyas Iyer and reaped the fruits of their endeavour the next season with a top-four finish. But KKR aren’t in a desperate situation, yet. With a similar performance in the second half, they would easily qualify for the playoffs. Then, do KKR see Morgan as a long-term captaincy option? Maybe. In a league system like IPL, a season is a long enough time to be called long-term.

TURIN (Italy): Cristiano Ronaldo has tested positive again for coronavirus on the eve of Juventus‘s Champions League clash against his great rival Lionel Messi’s Barcelona, according to media reports in Italy and Portugal.
Portuguese TVI reported that Ronaldo “has once against tested positive for Covid-19” following a swab carried out by Juventus.
The 35-year-old is now awaiting the result of a UEFA test which, if also positive, would rule him out of the Group G game in Turin.
Ronaldo first tested positive for Covid-19 two weeks ago while playing with Portugal, and has been in self-isolation since returning to Italy.
According to TV1, the five-time Ballon d’Or winner has tested positive 18 times.
Ronaldo needed to return a negative test, 24 hours before the game to be allowed to play, according to UEFA rules.
Juventus only confirm if a player has recovered, with Sky Sport Italia and Gazzetta Dello Sport reporting that Ronaldo will miss the Barcelona game.
“Ronaldo had a test like everyone else, this evening (Tuesday) we will have the definitive result,” coach Andrea Pirlo told a press conference earlier Tuesday.
“For now it’s all on the high seas, when the final result comes everything will be clearer.
“Depending on the result, we’ll see what we do. It’s not easy to play an entire game after 15 days of inactivity.”
Ronaldo, who has no symptoms, has missed three games including his side’s 2-0 Champions League win at Dynamo Kiev last week.
The clash would be the first between Ronaldo and Messi since the Portugal forward left Real Madrid for Juventus in 2018.
“For 15 years, Messi and Ronaldo have done great things,” said former Italy and Juventus midfielder Pirlo.
“For the first time, I’ll be taking on Messi as a coach, I’ll treat him with the enormous respect that he deserves.”
Barcelona coach Ronald Koeman added: “We always want the best to be on the pitch, and Ronaldo is a great player.
“I don’t know if he will be in condition to play, that’s not my problem. But if Ronaldo is there, it is one more reason for us to be ready.”
Koeman, like Pirlo, has taken over as coach this season, with the teams top of Group G after winning their opening fixtures.
But the Dutch manager has been under pressure after a 3-1 defeat against Real Madrid at the weekend followed a 1-0 loss to Getafe, the first time in four years the Catalan giants have suffered consecutive defeats in the league.
Barcelona president Josep Maria Bartomeu also resigned on Tuesday along with his board of directors, following mounting pressure from fans and his public falling out with Messi.
Ronaldo and Messi now look set to meet again in the reverse fixture at the Nou Camp on December 8.
Messi, 33, has featured in four victorious campaigns for Barcelona, while Ronaldo has won the Champions League five times, four with Real Madrid and once with Manchester United.
Messi has six Ballon d’Or titles with Ronaldo claiming five.
However Ronaldo has 130 Champions League goals to Messi’s 116.
“It’s clear that any team would miss a player like Cristiano,” said Brazil defender Danilo at the pre-match press conference.
“But we have faith in every player on the team. We have people who want to do well and help us have a great match.”
Messi has won 16 of their 35 encounters to Ronaldo’s 10, with the remaining nine ending in draws.
The pair have only met five times in Champions League games, most recently in the semi-final in 2011.
Pirlo also has defensive worries with captain Giorgio Chiellini, and Matthijs De Ligt out but fellow centreback Leonardo Bonucci’s thigh strain will be evaluated on Wednesday morning.
“These are the matches that everyone would like to play. We have this opportunity and we can’t wait to test ourselves against Barcelona,” said Pirlo.
“It’s not a decisive game, but we still want to see what our value is.”
Argentina forward Paulo Dybala remains “a bit tired” after playing for 90 minutes in his first match in over three months last Sunday against Verona.
“It’s normal after the first game as a starter. He’ll have time to recover and play tomorrow night.”

IPL 2020: Here are each IPL team’s chances of making it to the last four | Cricket News

With Chennai Super Kings clearly out of the race, what exactly are the chances of the remaining seven teams to make it to the playoffs? TOI’s Shankar Raghuraman does the number crunching to arrive at these 12 points.
1. Delhi can now only get a maximum of 18 points and Kolkata Knight Riders and Kings XI Punjab can manage 16 at best
2. The maximum any team can reach is 20 points
3. Now only two teams can reach the figure of 20 points – Mumbai Indians and Royal Challengers Bangalore
4. If one of these teams gets to 20 points, the other can’t
5. Mumbai, Bangalore and Delhi are the only teams that can be clear No.1 at the end of the league stage
6. Kolkata and Kings XI can at best tie for top spot on points. The best Hyderabad or Rajasthan can hope for is tied 3rd spot
7. With 9 games left, there are 512 possible combinations of match outcomes (not counting washouts). Before the last weekend’s (Oct 24) matches started there were 32,764 possible combinations of outcomes.
8. A tie for at least one of the positions from 1 to 4 is a near certainty with only 5 of the 512 possible outcomes (less than 1%) yielding clear numbers 1, 2, 3 and 4 teams
9. Mumbai and Bangalore have a better than even chance of either being clear No.1 or tying for the top spot (272 out of 512 possible outcomes)
10. Despite their crushing loss on Tuesday, Delhi still have a one in three chance of being clear No.1 or tying for first place
11. Chennai remains the only team that is out of contention for the playoffs
12. After their big win on Tuesday, Hyderabad have a one in five chance of finishing tied for third or fourth spot. But for that they need to win their remaining two games and hope other results go their way

The IPL 2020 season has been a very competitive one. With a team like Kings XI Punjab rising from the ashes after languishing at the bottom of the points table, thanks to five wins on the trot, things have become more interesting. The three break away teams this season have been Mumbai Indians, Delhi Capitals and Royal Challengers Bangalore. Mumbai and Bangalore though both lost over the last weekend and Delhi were thrashed by Hyderabad on Tuesday. With seven teams in the running for the four play-offs berths and three teams (Mumbai, Delhi and Bangalore) more than likely to seal a spot, the fight for the remaining fourth place (for which KXIP and KKR are the prime contenders as of now) could make the remaining league matches of IPL 2020 very interesting. Expect the teams to throw everything, including the kitchen sink to try and grab a play-off berth in the matches coming up.

IN PICS: How SRH kept their playoff hopes alive with a big win over DC 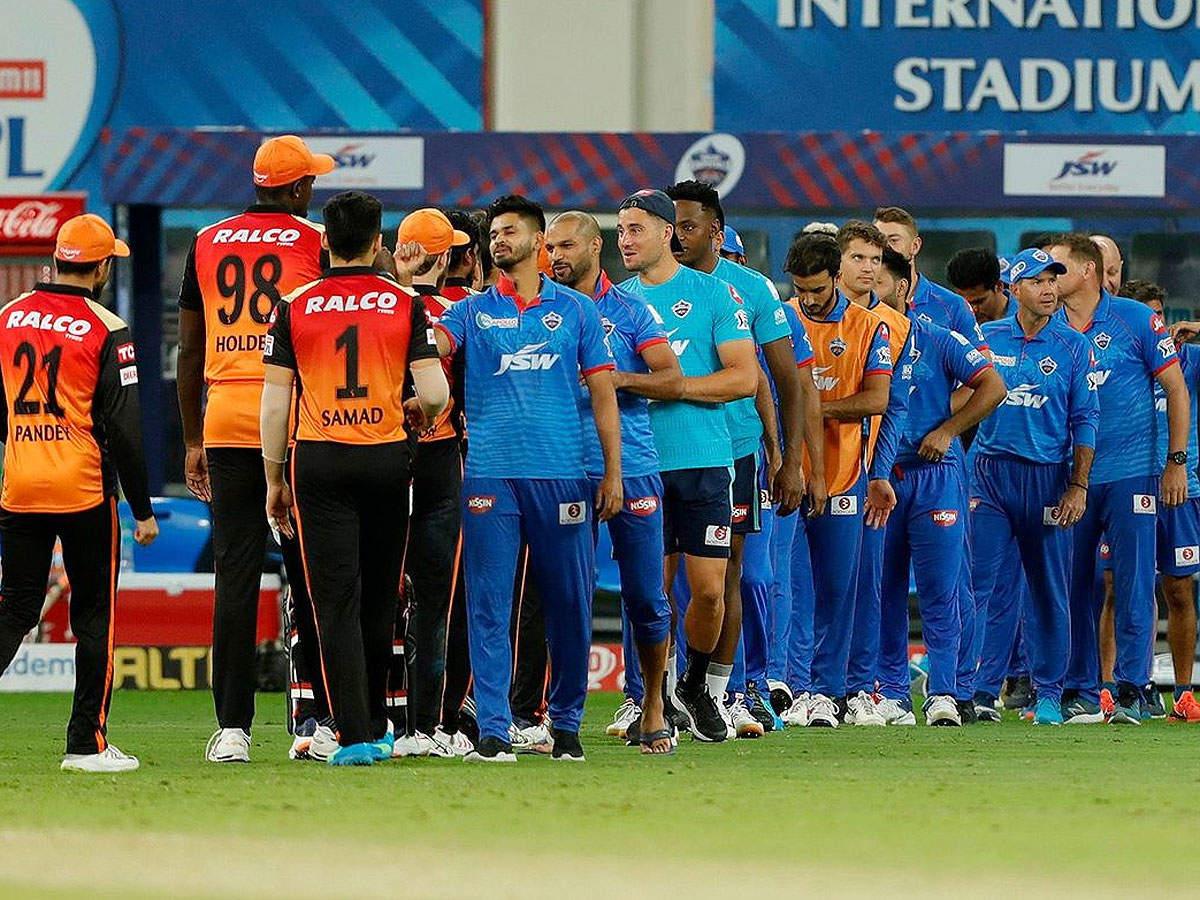 Coronavirus: Can you gain immunity from COVID-19?