Anger burns a hole through the screen in this stark monochrome picture from veteran director Andrei Konchalovsky: a gruelling re-enactment of the hushed-up Novocherkassk massacre in western Russia in 1962, when Red Army soldiers and KGB snipers opened fire on unarmed striking workers, killing an estimated 80 people. It was a day of spiritual nausea for the Soviet Union, which had only just entered Khrushchev’s new de-Stalinised era of supposed enlightenment – a postwar civilian bloodbath that was the Soviets’ Sharpeville, or Kent State, or Bloody Sunday, or indeed the Corpus Christi massacre in Mexico City that featured in Alfonso Cuarón’s Roma.

Yuliya Vysotskaya – a longtime Konchalovsky player – plays Lyuda, a Communist party official and single mother who lives in a tiny flat in Novocherkassk with her 18-year-old daughter Svetka (Yuliya Burova) and grizzled old dad (Sergei Erlish). There are terrible food shortages, yet Lyuda is a loyal and uncomplaining party member who not so secretly pines for the good old days of Josef Stalin, when the Soviet Union was bathed in glorious wartime destiny and when things seemed to be better all round. Now she is having a furtive affair with a cynical and bleary married committee official who doesn’t even seem to like her that much.

To the party’s uncomprehending disgust, a strike is triggered by exhausted workers’ rage at the sudden combination of lowered wages and food price rises and the party’s fatuous claim that this lethal combination will ease pressure on state finances and, therefore, create more plenty in the long term. There is horrifying chaos and slaughter: Svetka goes missing, and Lyuda embarks on a desperate quest to find her, dead or alive. What’s worse is that she has a party-loyalist reputation for endorsing precisely this kind of cruel crackdown and must suppress her secret anguish about her missing daughter and give an address to the party faithful beginning with the greeting: “Dorogie tovarishi!” (“Dear comrades!”)

Konchalovsky very clearly shows the combination of incompetence, paranoia, bureaucracy and secrecy that created this mass murder. I found myself thinking about Craig Mazin’s recent TV drama Chernobyl. The same instincts are on display: to shut down the city, to cover everything up, smother everything and fail to understand. There is here an intense regional dislike of Novocherkassk and the whole area as the home of the untameable Cossacks and peasants. Lyuda’s father has grim memories of retributive local killings, and he reflects grimly on Mikhail Sholokhov’s And Quiet Flows the Don and its bitter vision.

So much of the film’s pain is in that single word: comrade. (Lyuda keeps finding herself singing a rousing patriotic song from the movie that’s just been on TV: Grigory Alekandrov’s Spring, with its earnest chorus of, “Oh comrades, protect your motherland at all costs!”) The word denotes equality and brotherhood and anti-hierarchical idealism that does away with caste and class. In fact, the word functions as a sentimental kind of denial about the vertical structure of power everywhere, with everyone afraid of people above them – but also people below, who could snitch, or suddenly be promoted over them. There is a chilling moment after the massacre when a bewildered young woman is curtly told to sign an official document confirming that she will never reveal to anyone what has happened, but is then taken away, apparently to be executed, when the KGB official decides her behaviour at their brief interview has been unsatisfactory. This woman’s fate is, however, even stranger and scarier than we think.

So the drama continues with officialdom blandly declaring that there will be a party with dancing that evening at 7pm, apparently to expunge any ill feeling, and also, given that the blood cannot be washed away from the asphalt and has somehow baked redly into it, a new layer of asphalt must be placed on top of it. And on top of all this, Konchalovsky places an unexpected ending with its layer of bleak irony: a passionate drama of fear and rage.

• Dear Comrades! is available on Curzon Home Cinema from 15 January.

It’s from something else!

Miranda wrote and performed the song with several other artists to benefit the Hispanic Federation’s UNIDOS Disaster Relief and Recovery Program.

Would You Pick The Same Actors For The Live Action Of "The Princess And The Frog" As Everyone Else?

BRB, starting a petition for Regé-Jean Page as Naveen. 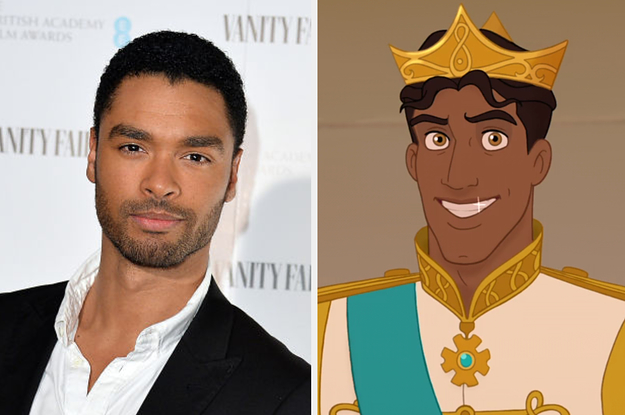 Are We Lost Forever review – breakup drama runs out of steam, if not sex | Drama films

Sheets in disarray, two lovers avoiding each other’s gaze; Swedish director David Färdmar opens his feature debut with an emotional bomb blast in a perfect white bedroom. “So you can’t even say it any more,” spits out Adrian (Björn Elgerd). Finally, Hampus (Jonathan Andersson) concedes: “I love you. But there is no more ‘we’.” Leaving the wounds hidden, this is a promisingly imposing opening scene – but Färdmar, as he charts the pair’s breakup, can’t fully flesh it out in a stiff and increasingly laboured LGBT drama.

Initially, it’s a duel for moving-on supremacy. Adrian seems to take the early lead, hooking up with an ex, while Hampus appears the needier, tearfully manipulating him back into bed. But it’s Hampus who strikes out first on a new relationship, while Adrian – resentment weighing behind his eyes – remains hostage to the issues that sabotaged them in the first place. Seeking to give these intimate negotiations epic dimensions, Are We Lost Forever follows in the footsteps of Abdellatif Kechiche’s Blue Is the Warmest Colour, sharing the same taste for establishing its naturalistic credentials through explicit sex scenes.

On the other hand, Färdmar struggles to deliver the dramatic money shots. Adrian’s control issues – obvious in the bedroom, and ably conveyed elsewhere by Elgerd’s watchful performance – are made clear. But the film isn’t focused enough to open this trait out into a compelling character study. The often-soapy exchanges in which Adrian masks his hurt before someone reaches across the table mean that the film’s initially well-braced rhythm starts to drag, while Färdmar’s rigid framings are a far cry from Kechiche’s limber entanglement with his lovers. Like its protagonist, Are We Lost Forever can’t break free.

• Are We Lost Forever is released on 22 January on digital platforms.

How to delay your periods without pills